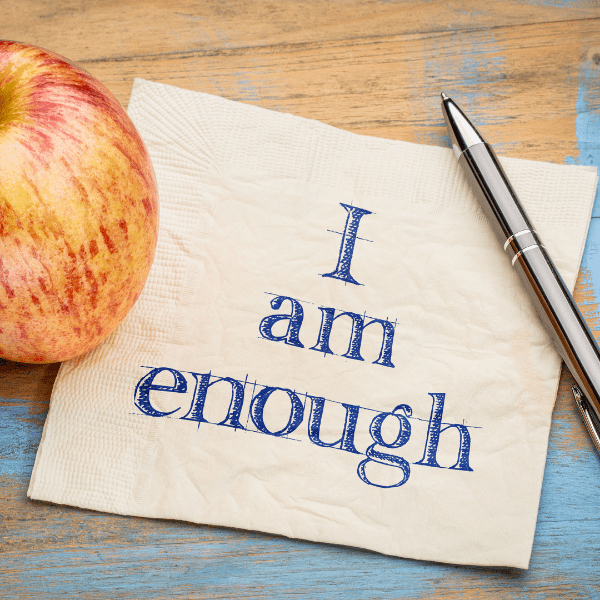 When you are content to be simply yourself and don’t compare or compete, everybody will respect you.

Instead of comparing our lot with that of those who are more fortunate than we are, we should compare it with the lot of the great majority of our fellow men. It then appears that we are among the privileged.

Enjoy your own life without comparing it with that of another.

Albert Einstein revolutionized how we see the world through the Law of Relativity, the idea that what something is, how it behaves, how we experience it can all change depending on our perspective. It’s true in science, and it’s right in everyday life.

This gal’s a better artist. That one has more followers on YouTube. But maybe I’m a better videographer.

So maybe I’m not the best blogger in the spirituality and self-improvement space. Should I get out of the business? Should I feel discouraged, depressed, or jealous? I can look at the strengths I have, namely, being open and honest and loving to share with others. Does the fact that someone else has those same strengths somehow diminish my own?

It’s all relative. And it makes me wonder, why do we compare ourselves to anything at all?

At any given moment, it doesn’t change our height, smarts, strength, speed, sociability or anything else. If comparing ourselves to others only serves to make us feel less than or more, then why do we do it? Does it bring us joy or destroy our self-confidence?

Does it expand our sense of well-being? Does it help us feel connected to others or separate us? Does comparing have any usefulness in our lives?

Can we stop comparing ourselves to others? That’s what I’d like to explore with you.

Why Do We Compare Ourselves to Others?

Humans compare themselves to others. We just do. It comes so naturally to most of us that I have to think there must be an evolutionary reason for it.

If we think back to paleolithic times or even much later when people lived in small communities, comparing ourselves made a lot more sense. It helped people establish their place in their community and identify how best they could contribute to the group’s survival.

But oh, how things have changed. We’re no longer just comparing ourselves to the few dozen people in our village, tribe, extended family, or what have you. We are globally connected through media, marketing, entertainment, social media. Now, we have thousands of people we can compare to ourselves.

So while in a small community, we could have been the smartest or the strongest or the prettiest or the best artist or hunter. But when we expand the competition to just about everyone globally, there is always someone better than us. Always.

And there are always people worse off than us. Then sometimes they look better in one aspect, but we don’t know they’re depressed and hurting.

The whole reason we ever really compared ourselves to anyone doesn’t exist anymore. And I could even argue that it never really existed.

When we’re looking out there for validation of how good we are, we end up sad and exhausted because while we’re trying to be like people who have fancy cars or million followers or endless wardrobe or whatever it is, that’s time we could be focusing on working on ourselves and achieving our dreams. You with me?

What Damage Do Comparisons Cause?

What’s the harm in comparisons? Is it significant enough to choose to stop? My personal take: Stopping the comparisons is one of the most important things you can do to improve your mental and spiritual health. It can even improve your physical health because we instead do what’s right for our own body when we stop comparing.

So I’m going to lay this out, and let me know what you think.

It’s Unfair to You

Like I said, the pool of people we’re trying to compare ourselves to today is enormous to the point that comparisons are no longer relevant. It’s unfair for you to expect yourself to compare to millions of people of which the most talented, gifted, etc., also tend to be the most visible.

So we’re not even comparing ourselves to everyone. We’re already trying to compete with people who are where they are because they’re in some way better than those around them.

It’s not fair. It never will be, so it’s a waste of mental energy.

There’s No Such Thing as an Apples to Apple Comparison

You have no way of knowing what that person has sacrificed or done to get good at that one thing. They may be miserable. They may never see their mother. They may live in fear of losing it all. They may feel forced to create content to stay relevant.

Those may not be things you want in your life or would be willing to endure for fame, fortune, beauty, or respect.

We don’t see the whole picture, and there’s no way we can.

A healthy person can wish they were smarter or more sociable. A more sociable person may want to be healthier and smarter because someone else is. The comparisons don’t really mean anything because we’re not actually comparing two like things.

Once again: I can only say that I’m a better, stronger, faster, smarter person than I was yesterday. That’s the only comparison that matters.

What happens when you’re the most beautiful person in the world? You may become so focused on your own beauty that you forget to focus on other things. When we are constantly reassured by ourselves and others that we have achieved the highest goal, we often stop trying to make ourselves better as a whole.

Now, what happens when you are no longer the strongest or best, and everyone has moved onto the next big thing. On social media, this can happen in a matter of hours or minutes. You feel this sudden boost, but then all of the admirers are gone. Seeking validation through comparisons from the outside just leaves us feeling empty on the inside.

You May Develop Resentment

When you’re comparing yourself, you’ll find yourself resenting people. Oh, that guy is a stingy rich person who doesn’t care about anything but their money. That’s just jealousy and resentment talking. That’s a snap judgement based on nothing other than them having something you want. They could be a great person. Why not find out?

It doesn’t matter what it is. When we compare ourselves to others, we are often secretly wishing they’d fail so we can be #1 or coveting what they have. That’s no way to live. Not only does it make us feel disconnected spiritually from others. It turns us into kind of a nasty person who doesn’t like to see others succeed.

You May Become Full of Yourself

Let’s say you really do have it all in your mind. Okay. Now, you’re walking around telling everybody you’re the most spiritual, good-looking, intelligent, and so on.

It will be hard to connect on a meaningful level with anyone because you’re always talking about how great you are and pushing people away.

Comparing ourselves to others can also make a lot of mental health problems worse. If you have social anxiety, you’re even more anxious around people if you’re constantly comparing yourself. If you have depression, then one trolling comment on your post can bring your mental state way down in an instant.

How to Stop Comparing Yourself to Others

Now, let’s see: This is definitely something we don’t want to carry anymore. It may have had some use, but it’s not doing us any favors now. Let’s make a plan together on how to beat this.

You’ll hear me say this again and again. So often, we’re not even aware when we’re doing something that is hurting us. We’re not mindful. To become aware. Pay attention when you feel some kind of comparison coming up.

Notice it. Don’t judge it. It’s natural to compare. You’ve been doing it since you were born.

You’ve been doing this a long time, so it’s going to happen. Just bring those feelings and thought forward so you can look at them.

Now, I don’t mean stop as is, bad girl, bad boy, stop that. Just gently stop the behavior to keep from letting you take you into a spiral of false pride, shame, sadness, or fear.

Think of What You’re Grateful for

And so often, when we are comparing, it’s not even a weakness. We’re just not as good as someone else. So what?

Don’t Be Grateful for Other’s Shortcomings

So I will say to be careful here. Beware this trap. Some people start feeling grateful by mentally putting the other person down.

“I’m so grateful that I’m funnier than them.”

Yeah, still a comparison, and we’re trying to get away from that.

In fact, let’s not put other people down in our heads or aloud because that’s not the kind of person you want to be.

Find Contentment in Not Being the Absolute Best

Some of us are hyper-competitive. It’s in our blood. We have to be the GOAT.

Learn to Love the Journey

Celebrate the fact that you’re always growing and learning more. That’s what life is all about.

When we stay focused on beating our personal best instead of someone else’s, we grow and get better much faster.

I say this on an intellectual level. But this is also emotional. Feeling content and loving our imperfections is an emotional journey. We need to listen to those emotions and not reject them, judge them, or suppress them. But as we process our feelings, we can find a place where we do feel content just being.

Know the Value of Enough

There will always be that next tech device, vacay locale, spa treatment, expensive beauty product, clothes brand, or whatever the social media influencers are pushing and telling you that you can’t live without.

But when it comes to personal possessions that you might want because someone else has them, there is peace of mind to be found in realizing, you know, I’ve got enough. I don’t need that. I don’t really want that. I just like that because I like that YouTuber and want to be like them.

When you realize that wanting things that people are selling is just another piece of the comparison puzzle, it’s so much easier to step back and say, no, I’m good with what I have.

You have enough, even if you think you don’t have a lot. Minimalism is still huge. So many people are figuring out they really don’t need to keep up with everyone else.

So when it comes to personal growth, health, mental wellness, relationships, yes, let’s always be working on improving those things. But Life is so much more fulfilling when you don’t and accept the value in enough.