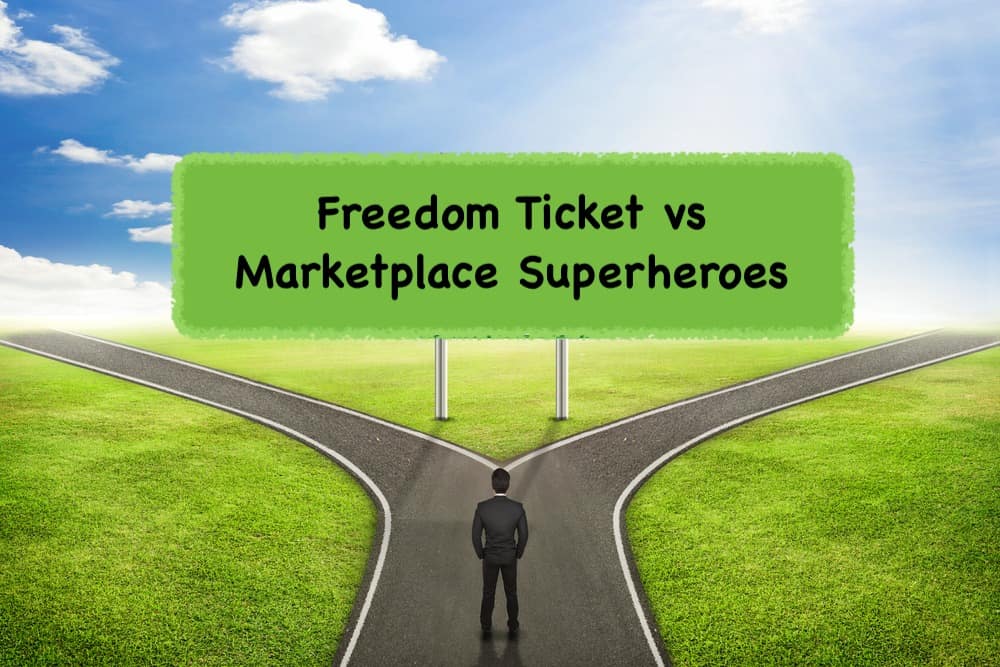 While Marketplace Superheroes has an excellent offer, you can now get the entire Freedom Ticket course for FREE. Let’s have a look at which one is best.

There are dozens of Amazon courses out there in the market today. To be honest, most of them are actually pretty good with many success stories on the back end.

One thing that often frustrates people is the cost of Amazon courses, with some stretching so far as $5,000 USD. Even at that price, they do represent great value (if you can afford it, that is…)

I believe in harnessing knowledge so you can dominate on Amazon, without the challenges of doing it yourself. At the same time, not everyone has tens of thousands behind them for education and to launch a range of products.

Luckily, there are a few courses out there which are super affordable while having excellent training materials. Sure – often not as high calibre as the $3k to $5k programs, but more than plenty to get yourself live and selling on Amazon.

Today I’ll be comparing two excellent Amazon courses side by side. That is Kevin King’s Freedom Ticket and Stephen Somer’s Marketplace Superheroes, otherwise known as MPSH.

Let’s jump into it.

I always tend to start “This Course vs That Course” comparisons with the teachers. Why? We need to know who they are and their depth of experience.

Stephen started as a warehouse worker many years ago and helped his then-boss get the entire catalogue online and through eCommerce distribution. After learning the ropes, he also built his own Amazon business selling consumables. After some time he partnered with Robert Ricky (SS & RR 😅) to bring their Marketplace Superheroes course to the world.

This man doesn’t really need any introductions among Amazon selling communities. Why? 20+ years in the game. I guess we can see that he’s learned a thing or two about eCommerce and distribution. He has at least 5 Amazon brands which often see him achieve 6 figure months each.

Some courses that I review are vastly different from each other. In terms of these two, there is some reasonable distinctions but not too many. It’s more-so in the formula rather than the presentation.

Stephen and Ricky are famous for their 5x5x5 formula. That is – sell 5 products per day, and build your product range to 5 actual products. After some time, you can have this selling in 5 countries that in itself, hypothetically, does result in a full-time income.

So it’s less of a focus on building a brand or having epic packaging, but more of a “let’s just get products and chuck it on Amazon” type of approach. Now don’t get me wrong, there is a methodology to their training, but the bulk of their students aren’t exactly rich. Trademarks, patents and launching epic products are out of reach for the average MPSH student.

In terms of video content, it’s excellent. Most of it is professionally filmed in a studio-setting with great quality sound. Some content is repeated as there are guest interviews and “follow a student from zero to live and selling” sessions which are excellent but also do touch on past concepts.

Kevin is definitely more into the brand building. Not only that, but he’s into the more competitive niches – that higher hanging fruit that those in MPSH won’t be touching.

After launching 5 brands, I’m sure he knows a thing or two. His strategy is quite standard among Amazon courses, so it’s not unique like the 5x5x5 approach. Regardless, Kevin’s methods for finding and launching profitable products does work.

Like Stephen and Ricky, video content in Freedom Ticket is excellent. I loved the lesson flow and overall structure. One notable thing is that the videos are 98% just Kevin talking and discussing concepts, whereas the MPSH guys provide a good change-of-pace by having up to 10 different people share insights.

What most people want to know is how they will be supported. I mean – you’re opening your wallet here. Beyond the enrollment, is there anything on the backend that will help you in the journey? Luckily, both provide it.

There is a Facebook group for MPSH so you can ask questions and get feedback. With roughly 5,000 people in here, including often Stephen and Ricky, you’re bound to get an answer.

You can also upgrade to a mentoring/coaching service. It’s reasonably affordable but I’d recommend doing the entire course first and foremost. Finding a profitable product to sell on Amazon isn’t that hard.

There is also a Facebook group for Freedom Ticket but unfortunately, it’s mixed in with the 20,000 members of Helium 10’s group. It’s a little disappointing since you can ask a question and will probably get varied opinions depending on the education level of the individual.

There isn’t a publicly advertised upsell for coaching. Knock on the right doors and you’ll get it, but Kevin doesn’t push it at all. This is because he’s against the course/guru industry where people sell $15k coaching packages. Start with the course first so you learn the basics.

This is the big decider – who’s going to cost less.

Marketplace Superheroes is $997 USD but also offer a payment plan of $97/month.

Freedom Ticket is FREE. The only catch is that you need a $97/month Helium 10 Subscription.

One option is to use this link and code “JOSHUASDISCOUNT50” for 50% off the first month.

When you already will need software for Kevin’s strategy, this offer is irresistible.

On the flip side, Marketplace Superheroes offers a 7-day free trial via my link. This way you get some time to have a look and feel for the system.

Stephen’s strategy doesn’t really require so much the use of the software. I mean – they have their own in-house software which is basic in its functionality, but when you’re selling low hanging fruit that other big sellers aren’t chasing, you’re not really needing to deal with the complexities of software.

Kevin, on the other hand, has his students focus on brand building a high sales velocity: 20 to 100 units per day. That requires software – no doubt about it!

Time to draw that line in the sand to declare who has the better course.

Kevin King’s Freedom Ticket is designed for brand-builders and those who want to become serial entrepreneurs like himself. MPSH is for the “Let’s get a product and sell it on Amazon” crowd. Both are great, but there is more value in Freedom Ticket given the recent partnership with Helium10 and the $97/month offer.

This doesn’t negate the fact that Stephen’s students will find success. If you’re on a budget to launch that 1st product, you will actually do better with Marketplace Superheroes and their 5x5x5 strategy. Kevin encourages his students to get into more competitive products, because well, that’s where the profits mostly are!

Remember that the bulk of Stephen’s students don’t have much capital. If that’s you, then the lower hanging fruit that Marketplace Superheroes brings forward is a better choice. Either way – you’re only up for $97/month. 😃 Both are easily the cheapest ways to start Amazon today from a mainstream course provider.

It really doesn’t matter which course you choose – both are excellent.

See: It comes down to you. Amazon is a capital and cashflow intensive board game.

It’s mostly those with a strong backing that are going to reap the big results, especially with Chinese sellers starting to dominate the marketplace.

Educate yourself. Make a start. Get that 1st product live but also play the long game. I see quitters every day, and only those prepared to do the work are going to reap the rewards at the finish line.

4 thoughts on “Marketplace Superheroes vs Freedom Ticket: Which is better?”

Join the May 2022 Masterclass