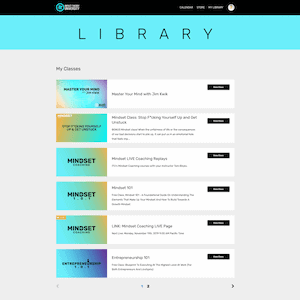 Curious as to what Tom Bilyeu’s Impact Theory University is like? I’ll share my own student experiences since I didn’t see any other real reviews out there on the interweb.

I’ve been a huge Tom Bilyeu fan for 18 months. The type of follower that screams in excitement the moment a new episode is available.

Yep, that type of dude. Oh yeah and I bought that shirt – it’s epic.

I was waiting for the day that he would release a paid members area, merely to ‘payback’ for the hundreds of hours of world-class content he’s shared across YouTube and other social media networks.

I knew what he created would be fantastic, but boy….this turned out to be even better.

Changing lanes for a moment, you’ve found your way to my blog which has been my calling for many years. As a Tom Bilyeu fan, I’ve inspired many people to discover how to reclaim their time and exit the rat-race.

This isn’t the place nor intention to pitch such an opportunity. Today I simply want to unpack everything and share my experiences with Tom’s membership area.

So let’s jump into what you’re here for. What’s inside the Impact Theory University? Does Tom go beyond his already spectacular A-game?

All good questions to have. And let’s answer the important question upfront. 99% of what you’ll find is available for free on YouTube. Tom even says so himself.

It’s that 1% that I absolutely REALLY want. It’s hard to ignore supporting Tom when he’s given for so long.

So if you’re curious – that’s why I pulled out the credit card. Even though plenty of people get this for free, I really wanted to support Tom.

I certainly wanted the live monthly (group) coaching, plus the additional Facebook group involvement. In fact, before this stage, I hadn’t ever met another Tom Bilyeu fan, online or otherwise. This, therefore, was a massive draw-card.

I couldn’t find an Impact Theory University coupon code when searching online, but I also chose the Yearly Bundle option which doesn’t have the option for a code either. But they do give a significant discount anyway!

Yes! I’m in. Got my confirmation email too. 😃

Pretty happy with this. My debit card for some reason didn’t work from here in Australia, but PayPal went through just fine. My online businesses are doing well, so the Yearly Bundle was well within reach.

Alright – this is what you’re going to see upon joining this vibrant community.

Then you’ll see the full library. It’s hard to find anyone else out there who has accurately reviewed this membership program on the inside.

Let’s unpack the content. Remember that I chose the bundle, meaning I have both the Mindset and Business tracks from Impact University. I’ll evaluate both separately, though they’re very similar too.

Most people will start here. I’d say that 70% of Tom’s audience is looking for mindset first, before business, despite having a high volume of business owners as his audience.

Recently on an episode, Tom revealed that his number one question is “I want to kill myself. What do I do about this?” which is both a shock (on an entrepreneurship channel) but certainly comes down to mindset. I later thought about how many on this journey really do struggle, and how I often push people away as it’s seriously hard work to build any business.

What you’ll be receiving is:

Access to the Facebook group is provided. It also includes students from the Business Track, with Tom sometimes dropping into the conversations as well.

I decided that this element is what I wanted the most, yet the Mindset Track is one I also *had* to have. Therefore, I chose the Bundle option.

The Business Track is very much mostly the live sessions. The only difference is you’ll be receiving the Entrepreneurship 101 course, as opposed to the Mindset 101 course.

I really love the Entrepreneurship 101 section the most after going through the content.

Lastly, both the Mindset and Entrepreneurship tracks have handouts in PDF form. It’s ideal for those who love to write down what they’ve learned, ask questions and otherwise stop the binge-watching sessions that we otherwise usually do on YouTube.

Both of these are huge! About 20mb in total. I’ve shared merely the basics. I’m trying to avoid spoiling everything. 😜

Essentially these handouts are a key differentiator between YouTube content and the Impact Theory University. Instead of listening to interviews on the subway, listening while working in another tab or watching while tucked in bed late at night, this is where you actually have to do some work.

I printed off all of these in color on high GSM paper at my local print store. This way I could go through them properly for my business and personal growth over the next 5 to 7 years.

It’s like Tom is giving us homework to do so we can actually yield concrete results. Not only that, but each live monthly coaching session comes with an additional handout too.

I would love to say that there’s a lot of upsides here. As Tom has completely over-delivered publicly, it’s a challenge to go to the next step. To bring more to the table.

Where the core difference lays is that YouTube is more for entertainment value, whereas the University is an instruction manual for success. It’s the procedure, as opposed to binge-watching.

Consider it tactical, and something that’s a challenge to do publicly, to the free market, where most people wouldn’t take it seriously. Personally, I mainly value those of which I’ve paid for.

As I outlined, it’s the live coaching calls for students only + student community group that got me inside. The course content is also very good, though at the same time (as you might imagine) is sometimes rehashed.

Often I would say the price is a downside to these training programs. Truth is – the pricing is right on-point. It’s affordable enough that almost all of Tom Bilyeu’s audience could afford it, at the same time, requires a slight leap from the comfort zone. The payment plan represents great value too, though as I said, I’ve chosen the yearly payment.

The main one is

This wasn’t so much a hindrance for me, but I can imagine might discourage others from paying, or even supporting the Impact Theory University.

For me though, it wasn’t really a problem at all. This is my journey, and I have little care about what other deals others might be accessing. If anything – mostly good can come from this.

Some of the tiny things I didn’t like so much:

But then these are personal frustrations which, to be quite raw, are merely 1st world problems. Tom has really brought rock-solid content to the table inside, with more of a ‘How-To’ or ‘Step-By-Step’ instead of merely binge-watching through social media channels.

I mentioned earlier that I’ve never met another Tom Bilyeu fan in person, despite having a great supportive network of friends around me. This was a key reason why I purchased Impact Theory University, so I can join their Facebook groups for students only.

Luckily I was able to find dozens of Impact Theory fans in Australia as well as New Zealand in each group. Those in Canada and the United Kingdom shouldn’t have any trouble either.

Update: Tom Bilyeu is coming to Australia in February 2020! Stoked! 😁

Like the courses themselves, three is a separate group for each. The Mindset group is more popular:

On the other hand, while smaller, the Business community is still strong:

Not only do you get access to these networking and support groups (with no selling…apart from Impact Theory Merch 😁), you can also attend live events with other students. Tom has done 2 such events in the US so far with more planned for 2020. Yes, this includes Australia as mentioned above.

In regards to the calibre, it’s certainly higher than any free Facebook group. I mean, when you outlay money on your education, you’re often going to find people who are pretty committed to their journey. It’s early days for me in both groups (3 months) so it’s hard to gauge what results people are experiencing in their world.

It’s clear that much more of Tom’s audience is interested in the Mindset material 1st. If starting a business is still in the distance for you, then I’d start with the Mindset track first. Like, you can always upgrade down the track and their support team replies quickly to emails (Shoutout to Namrata here!).

Commonly, the type of student who joins Impact Theory University is the one who fits the following criteria:

If that’s you – then jump on board. Impact Theory University doesn’t have an affiliate program, and quite clearly, there is no need for one.

Update December 2020: ITU now has an affiliate program but it isn’t the type of program that needs affiliates per se.

If you’re wanting to support my review here, you can use my referral link here. This helps channel more funds and awareness into my #1 charity, Destiny Rescue. Read more here.

My experiences within ITU are continuously developing. I’ll update this evaluation as time goes on as to the ‘impact’ that that has had, both personally and financially.

I would recommend for just about anyone o jump on board. Tom’s created the How-To process here and does go well beyond what he features on YouTube.

The refund policy is quite substantial, and their offer of free entry via the Impact Theory University Scholarship is quite generous. 😊

If you have questions, then you’re welcome to drop them below. I’ll do my best to help you out as a fellow student.

And I’ll catch you on the inside! 😃