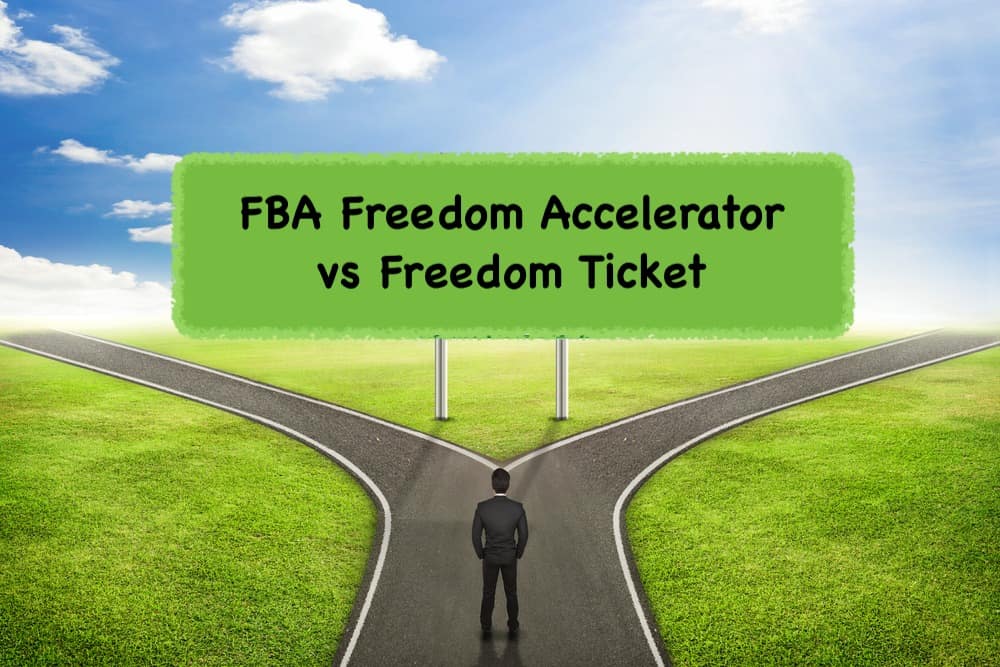 Two of the best courses available are Freedom Ticket by King King and FBA Freedom Accelerator by Myles Dunphy. Both are great, but one is cheaper.

Of course, you want to know which is better. Through this comparison, I’ll do my best to outline each.

But before we start, let’s outline some things upfront:

And most importantly, this is a long term play. Forget the short-term wins that some whizzbang guru floods your Facebook feed with.

With that out of the way, let’s begin.

I’ll be evaluating each educator in as much detail as I can, including some shortcomings.

Mind you, I respect each person wholeheartedly for the depth of training that they bring to the FBA eco-system.

Quite literally you can’t make a bad decision with either. I mean – that’s the summary right there. Kevin and Myles are both excellent teachers.

Let’s have a closer look now.

Let’s start with the teachers. Who are they and what’s their experience in eCommerce?

After a few years of being an Engineer, Myles found Amazon and with the capital behind him, also found success on the platform. He openly shares his challenges, learnings and results through his YouTube channel.

Myles is Australian but his audience and students are mostly not Australians which is odd. I think a lot of people resonate with his natural language flow.

Kevin has been in eCommerce for 20 years now. That’s 4x or maybe even 5x more than Myles! With that experience, you can be sure that he brings the goods to the table, especially after launching 5 Amazon brands.

Kevin is North American (or Canadian, apologies if I got this mixed up) and his audience is mostly North Americans. That said, he also has a global audience too including dozens of Australians inside his course.

I found a lot of similarities when evaluating their course content. It does have to cross over in many ways, but I’ve evaluated other courses that had quite a spread.

It’s clear that both Myles and Kevin think alike.

Very analytical in its approach, but also Myles is charismatic. If you’ve watched Myles on YouTube as I have many times, you’ll know exactly what I mean.

Videos are filmed at home, in his Airbnb or at times on his boat. Audio quality is great though the lighting can be a little challenging. There are a few videos added to the course since it has been released in late 2018. It’s a little less formal but is made up with Myles’ natural flow of communication.

With 20 years in eCommerce experience, you can tell Kevin absolutely knows his stuff down to the fine line. Sure, he’s not as charismatic as Myles but comes in with logic and rationality. Kevin really would resonate with the older crowd above 30 years old.

In terms of content, it’s professionally filmed in a studio setting with excellent lighting. Sound quality is great too. It just feels a bit more formal.

One thing I didn’t like when I joined was the staggered-release of videos in Freedom Ticket. You can watch the entire 8-week program at once. But actually that stops students from binge-watching lessons (including myself, admittedly).

Now while it’s great to be paired with an experienced mentor and their course, how does a student handle support questions? Some courses focus so much on the enrolments on the new students while forgetting those on the inside who could become raving fans.

When the course was initially released, Myles was offering email support. Today with hundreds of students, this is a bit challenging to do. Add in the fact that Myles travels the world via catamaran and is sometimes out of touch.

Get this, there are 21,000 students in Kevin’s group. That’s impressive! You can freely ask questions too, but with such a high volume of students, it won’t always be Kevin himself that can address every question.

Kevin also supports students with a paid coaching program though this is rarely advertised. He’s definitely not a fan of courses and upsells at all, but if you knock on the right doors, you’ll find a way in.

I’m a little against online-only courses. This is because so many people buy the shiny lights, then get lost being stuck in front of their computer all day long.

Live events really take it to a whole new level. You can meet other students on the same journey and even the educator himself. Entrepreneurship is already a lonely journey and it’s rare to find a million-dollar business owner hiding in front of their computer all day long.

Unfortunately no events for students who join the FBA Freedom Accelerator. Myles is travelling the world via sailboat and is focused on growing his two YouTube channels, as well as his Amazon business. If he did run events, it would likely draw the younger crowd under 30.

Not only does Kevin run his own live events, but he also speaks at some well known and hard-to-get-into type of events such as Global Sources. He’s not into the motivational stuff, but merely what works. His events draw an older yet motivated crowd.

Both courses are paired with Facebook groups. Not only can you ask questions (if you haven’t already found the answers in their respective courses) but you can also find others in your local area. If you can’t make it to a live event, then a Facebook group is the next best thing.

There are a few hundred students here and almost all of them are now to the Amazon business model. There is a tiny percentage that has gone live and are selling today. Younger age bracket mostly.

More than 30x more members, though it can be a mixed bag here. You’ve got the motivated person who’s grinding his way to success, plus the dude with $500 in his back pocket. While hundreds of students are live and selling, it’s still a relatively small ratio.

Both the FBA Freedom Accelerator Amazon course and the Freedom Ticket course are priced at $997. But guess what? You can now get Freedom Ticket for free.

Just how so? Helium 10 is popular software used by 50,000+ Amazon sellers today, including me. I’m a huge fan of their software actually, especially now that it has all this free training.

When you’re selling on Amazon, you WILL need software. It’s like a GPS to find your way to the finish line.

Instead of making a fortune selling courses, Kevin decided to partner with Helium 10. Starting today if you get a $97 membership to Helium 10, then you’ll get complimentary access to his entire course.

To make it an even better deal, you can use the voucher ‘JOSHUASDISCOUNT50‘ for 50% off in the 1st month. That’s less than $50 to get started with a full Amazon course today. 😃

Now to be fair to Myles, he occasionally has provided a $97/month payment plan for his course but it appears closed at this time of writing. That said, you’ll still need to outlay additional capital for monthly software.

Here’s what I believe having done both courses:

The Freedom Ticket course is free with a Helium 10 subscription, while Myles provides so much free content upfront via his YouTube channel. It’s clear that Kevin has much more experience but the charismatic nature and teaching of Myles is hard to pass on. Both are offering excellent value.

Kevin still sells his course publicly for $997 and so few people know that you can get it for free with Helium 10.

Just in case you missed it, my discount code “JOSHUASDISCOUNT50” makes it even cheaper. It’s case-sensitive.

I would choose Helium 10 if you’re on a budget. Having access to a FULL Amazon course from Day 1 is hard to pass on, especially for beginners.

If your budget is huge, then Myles has an excellent course. Then again, the experience that Kevin brings to the table is also hard to pass on.

Younger people are more likely to resonate with Myles, whereas the older generation is more inclined to do go with Kevin.

Pricing aside, you’ll have the chance to meet Kevin in person at live events. He’s built 5 Amazon brands which is an epic achievement.

Truth be told, I look forward to meeting both of these gentlemen. They have a different crowd while both being successful as both Amazon business builders and educators in this space.

Whether you choose Myles or Kevin, you’ll be equipped with the knowledge you need to dominate the Amazon marketplace.

Look – I’m just glad you’re prepared to invest in your education as I have.

See, Amazon isn’t as easy as it was just a few years ago. We all know that, right?

Chinese sellers are now making up 30% of FBA sellers. What they lack in customer service, the product experience and innovation is your advantage. We still have the upper hand, plus the customer is becoming wiser.

What you really need is the capital, the knowledge, but most importantly, the momentum. This isn’t an easy journey but one that has changed my life.

Get yourself the education and start the journey today.

Most importantly, hold the courage to power through the tough times.

Join the May 2022 Masterclass